Patser is the 3th feature film by the directors duo Adil El Arbi and Bilall Fallah, 2 young men from Moroccan origin making films in Belgium and -yes!- in LA. This film is long expected, because of its cast and thematic, namely the drug trafficking and gang war in Antwerp. 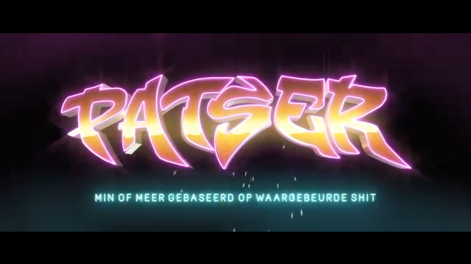 Patser tells the story of 4 friends living in a multicultural district in the city of Antwerp. Their uncertain futures and desire for wealth drives them to dealing hard drugs, despite the tough competition of other drug dealers. Their only goal is to become ‘patsers’ (gangstas), and the main force that drives them is their lifelong friendship.

The film is divided into 7 chapters, according to the Christian seven deadly sins (sloth, greed, wrath, gluttony, pride, lust and envy) Why they opted for the seven deadly sins as a narrative structure? Well, one of the main characters Adamo is one part Italian and one part Moroccan, but raised as a Catholic. The story is told in chapters by Adamo in voice-over, so he is the one who relates the story of the 4 friends to the capital vices.

Matteo Simoni plays the role of Adamo and is supported by his 3 sidekicks Junes (Junes Lazaar), Badia (Nora Gharib) and Volt (Said Boumazoughe), the latter actor is mostly known as a rapper in the Antwerp collectives NoMoBS and SLM and also provided some songs for the soundtrack.  Simoni is the only known actor of these 4, and we all know his presence will be one of the main reasons for people to go check Patser. He is a very talented actor and his Antwerp-Moroccan accent is flawless.

The main opponent of the 4 drug dealing friends is the notorious Dutch gangster Hassan Kamikaze, a role played by the well-known Dutch rapper Ali B. His performance is phenomenal. I almost believed that he is as misogynist and aggressive in real life as in he is in the film (which he obviously isn’t)! In my opinion, his performance is the most convincing and brutal of the entire film.

Another important part is the role of the police officer Yasser (Nabil Mallat), whose main goal is to end the drug war in Antwerp. Some of his colleagues on the other hand are very corrupt (Jeroen Perceval & Axel Daeseleire), but believe me, what goes around comes around. By the way, you might also recognise the DJ-duo Dimitri Vegas & Like Mike in a small role, just to close the circle of famous faces in Patser.

El Arbi & Fallah worked with Robrecht Heyvaert (The Ardennes (2015), Black (2015)) as the Director Of Photography. He is one of my personal favourite cinematographers in Belgium and he proves himself again this time. The shots follow each other at a very high pace, leaving no details in the dark. The visuals hit you like a line of coke and are dazzling. Every single shot and all camera perspectives are well considered, keeping both the characters and the location in mind. When watching, I felt like I had no time to think things over, because the pace is really overwhelming at times. Not even mentioning the inserts of neon titles, which make the whole even more flashy. The film takes over 2 hours, but it never felt this way, because of its solid pace and action-driven narrative.

Patser is full of vulgar language, which resembles the actual way of interacting between  youngsters and thugs in Antwerp unfortunately. It was disturbing at times, a bit too much, which I guess some viewers will confirm. Nonetheless, this is the only negative aspect, and I found the cursing less disturbing than how some of the male characters act overtly disdainful towards women. Moreover, the use of Moroccan slang (‘tfou’, ‘drarrie’, ‘tnawies’,….) and Arabic dialogues add credibility, which is definitely an asset.

The audience seemed to have the tendency to compare Patser to the directors’ previous feature films Image (2012) and Black (2015), but in my opinion they are simply incomparable. Black was already a hit, but more modest and raw than Patser and with a young unknown cast. Patser is over the top in every single way, just like El Arbi and Fallah announced. Also visually, Patser is the most colourful film in the directors’ oeuvre. Narratively, El Arbi & Fallah offer us more backstory this time. We get flash-backs of the 4 friends when they were kids and how they grew up together. This enables us to identify with them and to feel empathy, instead of seeing them as mere thugs.

Patser is a gangster film beyond imagination with a lot of filmic references to gangster films or characters like Tony Montana in Brian De Palma’s Scarface (1983). El Arbi & Fallah announced it to be epic and after watching the trailer a month ago, my expectations were as such. These expectations are definitely met, but I would describe Patser as ‘love it or hate it’. If you don’t like foulmouthed dialogues and violence, it is not your thing. Nonetheless, Patser is unique in the Belgian cinema because of its hyperkinetic pace and colourful visuals. To conclude, go and check it out for yourself!

Patser will be released on January 24th in Belgium and on February 1st in The Netherlands.