Ce qui demeure (‘What remains’) is a 14 minutes short film by Pegah Moemen Attare and was selected for the Flemish Competition: Fiction at the International Short Film Festival in Leuven. The film is her graduation film for LUCA School of Arts in Brussels and is her very first festival selection, but it is also the one that will offer her acknowledgment as a female director, I’m sure.

Chloé (Zoé Lejeune) -a woman in her 30’s- visits her hometown after a long time. She peeks inside the old house of her grandparents, until a young girl takes her inside to watch what changed. She is also reunited with her grandfather again after all those years. According to Moemen Attare, the film is “about memories and holding on to little details in order to keep the memories alive”. So for example the recurrent reference to the pear tree in the garden of Chloé’s grandfather. She is holding on to it in order to recall details from her childhood. Also their dialogues have a nostalgic tone.

Ce qui demeure is rather poetic in style, but still accessible. There is a good balance between narrative and visual style. I specifically liked the opening shot  of Chloé walking in a field of flowers. This image caught my attention, because of its aesthetically perfect framing, its symmetry. 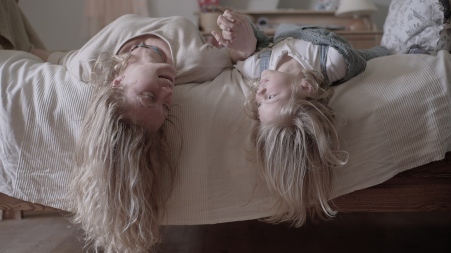 The overall atmosphere in the shortfilm is very light, literally and in a figurative sense, by using light wooden details and rays of sunlight for example. This adds tones of frivolity and happiness to the film, as if in a dream.

Although it is typical for a short film to be rather linear in its narrative, I really missed some backstory to it. Let’s say it is pure curiosity from my side. Why did Chloé leave the small village? Who is the little girl that shows her around?…

The modest acting of Zoé Lejeune, along with the nostalgic atmosphere and the balance between visual style and narrative are the main elements that make Ce qui demeure easily accessible and pleasant to watch at the same time.

Check the Facebook-page for more info.