IT is the second feature film by the Argentinian Andrés ‘Andy’ Muschietti about a killer clown called Pennywise, who feeds on fear. Based on the 1138 paged-book by Stephen King and 27 years after the successful mini-series by Tommy Lee Wallace (1990), its remake is long awaited. Muschietti’s version is the first one to ever make it to the theatres worldwide. IT is a global cult story since the 90’s. With the red balloon as a symbol of fear and death. 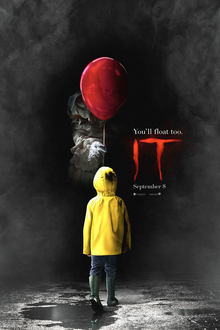 Muschietti’s last feature film Mama (2013) was considered a failure, but nonetheless the audience is not prejudiced towards this feature film. King’s book, on which the film is based, is so voluminous that it seems impossible to maintain all subplots in a 135 minutes-film, but nothing could be further from the truth.

The story starts with the magnificent prologue where Bill’s younger brother Georgie folds a paper boat to float on the rain stream outside. That’s the moment when little Georgie meets Pennywise, the dancing clown (Bill Skarsgard). The story then continues with Bill (Jaeden Lieberher) and his friends Richie (Finn Wolfhard, also known as Mike Wheeler in the Netflix-series Stranger Things), Stanley (Wyatt Oleff), Ben (Jeremy Ray Taylor), Eddie (Jack Dylan Grazer), Mike (Chosen Jacobs) and the only girl in the pack Beverly (Sophia Lillis) searching for what happened with all the missing children in their hometown Derry. The hideous clown terrorises, kidnaps and kills children, but when he meets Bill’s so-called Losers Club, het gets more opposed than ever. He wants to haunt them too, by playing tricks with them and scaring them. Because that’s what Pennywise lives from, the fear of children. You know you’re finished when you see the red balloon.

If anything, or anyone, makes this book adaptation a succes, it will be Bill Skarsgard (also known from David Leitch’ Atomic Blonde released in August this year) as Pennywise, the dancing clown. Bill is only 27 years and is the youngest Skarsgard, brother of Alexander, son of Stellan. He  comes from a good family, let’s say. His performance is frightening and he succeeds in becoming a demonic being with a chilling grin. 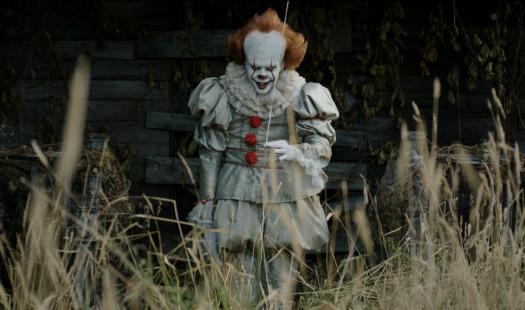 In comparison to the 1990-version of IT on ABC, the original Pennywise (Tim Curry) was more clownlike and entertaining, also more talkative, where Pennywise now is simply cool and creepy staring and grinning at the children. It’s that demonic grin of his that makes it 10 times scarier than the mini-series. On the other hand, Pennywise gives you the creeps, but the special effects of the film (like his monstrous teeth) pull away all mystery and turns it from a thriller into a gory horror. Arms being ripped off, blood all over the place, etc….

This film is not only telling the story of a killer clown, but is also about friendship, loyalty and belonging. The Losers Club sets a very good example of how it should be. Very morally educative in my opinion. IT succesfully combines horror with coming of the age satisfying different types of audience. I guess this is Muschietti’s big commercial succes he was hoping for.

To conclude, although IT conveys the beautiful message of friendship, the film is most definitely not for those who have coulrophobia (or more commonly explained as fear of clowns 😉!). Personally, I am no clown fan either, so I guess I missed some crucial details of the film while hiding against my neighbour’s shoulder. Forewarned is forearmed.