Mark Renton (Ewan McGregor) returns to Edinburgh after 20 years. He lived in Amsterdam in The Netherlands, kicked off from drugs completely and is now getting divorced. He betrayed his friends 2 decades ago and ran off with their money. Wondering how they’ve been doing, he decides to help out his old best friend Simon “Sick Boy” to built his sauna, which is actually a brothel. In the meantime, he gives support to Spud, whose life is one continuous up and down between sobriety and heroin addiction. But what happens when Begbie discovers that Mark is back in Edinburgh?

The original 90s cast is reunited with Ewan McGregor, Jonny Lee Miller as Sick Boy, Ewen Bremner as the benign junkie Spud and Robert Carlyle as the aggressive Begbie. A 5th leading role is for Sick Boy’s Bulgarian girlfriend Veronika (Anjela Nedyalkova). We’ve been waiting exactly 21 years for this sequel as authentic as Trainspotting, because of the flawless Sottish dialect spoken by all actors. 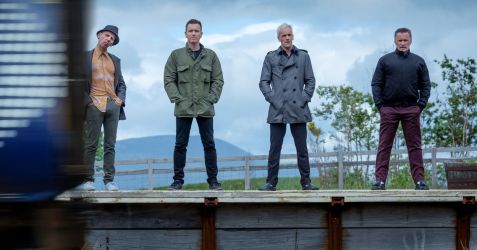 The visual and narrative style of T2 is as eclectic and vibrant . Boyle’s film is entertaining, funny and confronting, all at the same time. You should look at his use of colours and framing (mise-en-scène). His cinematographer Anthony Dod Mantle (Slumdog Millionaire,…) plays with camera viewpoints and shifts between perfect symmetrical framing and ground-level shots, which makes the film visually attractive.

Very remarkable is the thumping soundtrack by High Contrast, Wolf Alice, Young Fathers and many more. The soundtrack gives the film the extra punch, just like its prequel. People undeniably relate Underworld’s Born Slippy and Iggy Pop’s Lust for Life to Trainspotting. Lust for Life is also back in a cool The Prodigy-remix.

T2 is a sequel, but should nonetheless be seen as a separate story, because the narrative’s focus has drastically shifted. There’s a big contrast to the ’96 prequel, in which drugs was the main Leitmotif of the entire film. In T2 you notice that the theme shifts from reckless boyish behaviour to manhood and more complex issues like friendship that can transcend a 20 year-gap. Where the 90’s classic was there to shock, T2 is there to morally educate.

As a fan of the first film, I would say you can’t watch the sequel without having seen its prequel. On the other hand, T2 Trainspotting is full of references and flash-backs to its background story set 20 years ago. Most sequels are made a couple of years after its precedent, which most of the time turns it into a mere copy, but the 20 year-gap makes T2 rather unique. Whether the film will be as big a cult classic as its prequel is doubtable though, because audiences are no longer easily shocked in times of over-exposing. Nonetheless, I felt this wave of nostalgia going through my body once I saw Ewan McGregor appear on the screen.  For me, Trainspotting shaped my youth and love for cinema, but it’s a matter of love it or hate it. In my opinion, listen to the soundtrack first (in the web links), dance, get excited and then check it out for yourself.

The Belgian release of T2 Trainspotting is on March 1st, 2017.