The reviews on Maggie’s Plan by the American Rebecca Miller (married to Daniel Day-Lewis) and its successful premiere at Toronto International Film Festival in September 2015 were all very promising and the subject of a single mother turned the rom-com into a controversial taboo-breaking feature about a young woman with a desire to have kids, but Maggie is definitely a woman with a plan. 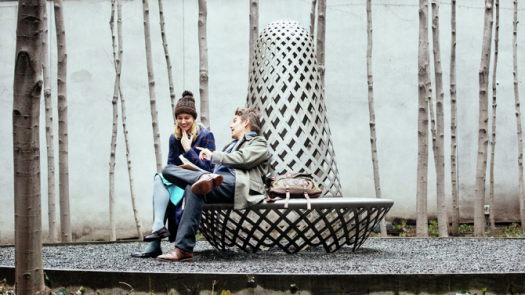 The young Maggie (Greta Gerwig), who comes from a traditional Quaker family works as an academic teacher in the college art department in New York. She longs to become a mother, but realises that she is not capable of maintaining a proper long-term relationship. So she decides to have an insemination by a surrogate, namely her high school friend and ‘pickle-entrepreneur’ Guy (Travis Fimmel). Initially planning on raising a baby by herself, she falls in love with her colleague and novelist John who is still married to the volatile, but genius academic Georgette (Julianne Moore). The audience clearly expects that this is not according to Maggie’s plan and that there will be some intriguing consequences. Wait for it….. Maggie gets fed up of being married and arranges the ex-lovers to reunite. We witness a kind of love triangle, that all parties seem to agree with.

Greta Gerwig might be an unfamiliar face to the mainstream audience, but she performed in plenty of series and feature films like Noah Baumbach’s Frances Ha (2012), Mia Hansen Løve’s Eden (2014) and the popular No Strings Attached by Ivan Reitman (2011). Gerwig is rightfully casted as the somewhat confused and seemingly unworldly Maggie. Nonetheless, it is Julianne Moore who stands out as the Danish ex-wife without her becoming a caricature. Her accent -including a ‘jah’ at the end of her sentences- is only very subtle. She remains natural and so proves her talent worth the Oscar she had in 2014 for Still Alice (Richard Glatzer & Wash Westmoreland). 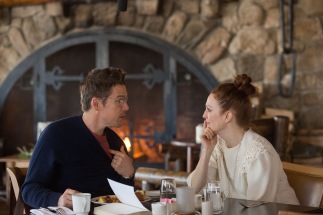 The images are not too complex, without specific montage techniques so the focus is mainly on the narrative instead of on the visuals. The only remarkable point is the constant centering of the characters in every frame, mostly composed as pairs.

The thematic of consciously unmarried mothers is quiet a new concept in Hollywood productions, additionally the fact that the film is directed by a woman increases the self-awareness of every single mother, or every woman with a desire to have kids, that everything is possible as long as you want it hard enough. Maggie is a setting example of female independence, nonetheless in her case sometimes just stubbornness.

The end is somewhat predictable, which turns the whole into a typical feel-good happy-ending Hollywood production. The closing shot keeps the end open, but is suggestive enough to be according to the audience’s expectations. Maggie’s Plan lingers somewhere between realistic and absurd, but unfortunately, my hunger for more conflicts or exciting plots was not entirely satisfied.