Aarde aan Daan is a Dutch Indie pop band consisting of 5 members (Daan Hafkamp, Luuk Hafkamp, Daan Henselmans, Jesse Fleer and Bram Koldenhof), with singer-songwriter Daan Hafkamp as the lead singer. This is their very first video clip for Drink Meisje Drink (“Drink Girl Drink” for the international readers) and is quite ‘special’ in the strict sense of the word. Although Hafkamp  himself is currently crossing the Dutch borders to Belgium, he prefers to say that his band Aarde aan Daan is a baby with mixed roots in The Netherlands (Amsterdam) and Belgium (Antwerp). 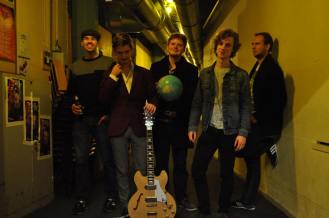 The director of Drink Meisje Drink, Michiel Robberecht, is a good friend of Daan’s and is currently working on a feature film. He made the clip in a very abstract, almost avant-garde style in which the time seems standing still by using a static camera. The band consciously chose to catch the contrast of being at  a standstill versus the superficiality and volatility of the digital era. Hafkamp himself explains that the clip is inspired by Coffee & Cigarettes (Jim Jarmusch, 2010) and the arts project The Artist is Present by the Serbian performer Marina Abramović (2010). These influences can be clearly noticed in the use of black and white and the static camera. The only thing to be seen in the entire video clip is 2 heads (the male character is Daan Hafkamp himself), who are just staring at each other. This might seem dull for some viewers, but wait for it! Near 2:30 mins the focus is on the tears welling up in Daan’s eyes, which will leave you wondering and speculating about the song’s actual meaning. Consequently, the lack of action makes you focus more on the music and lyrics.

The video clip for Drink Meisje Drink is a matter of ‘love it or hate it’, but cinephiles, who are fond of Jarmusch’s poetic visual style of long-shots and minimal sets will probably go for the first option.